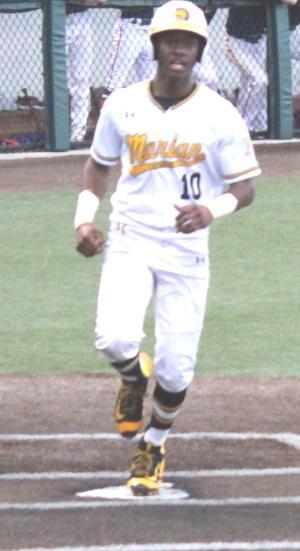 MAY 22, 2019- Stagg scored in almost every way imaginable on Wednesday, capitalizing on 11 hits for a 15-5 decision over Marian Catholic in the Marian IHSA 4A Regional semis at Ozinga Field in Crestwood. The Spartans (17-18), who dropped eight of their last nine contests, managed just three hits in the setback.

Zach Schilling and Pierce Jones scored in the first inning for Marian, but Stagg responded with 15 unanswered runs. The lone Spartan safeties came off the bats of Angelo Cantelo, Alec Gonzalez and Eddie King.

Left: Pierce Jones scores a first-inning run May 22 vs. Stagg.

SPARTAN DRAFTED: Spartan Pierce Jones (Northern Illinois University) was drafted in the 26th round of the 2019 Major League Baseball draft by the San Diego Padres.

(Videos: Last out of the 2012 semifinal, last out and awards ceremony of the final.)