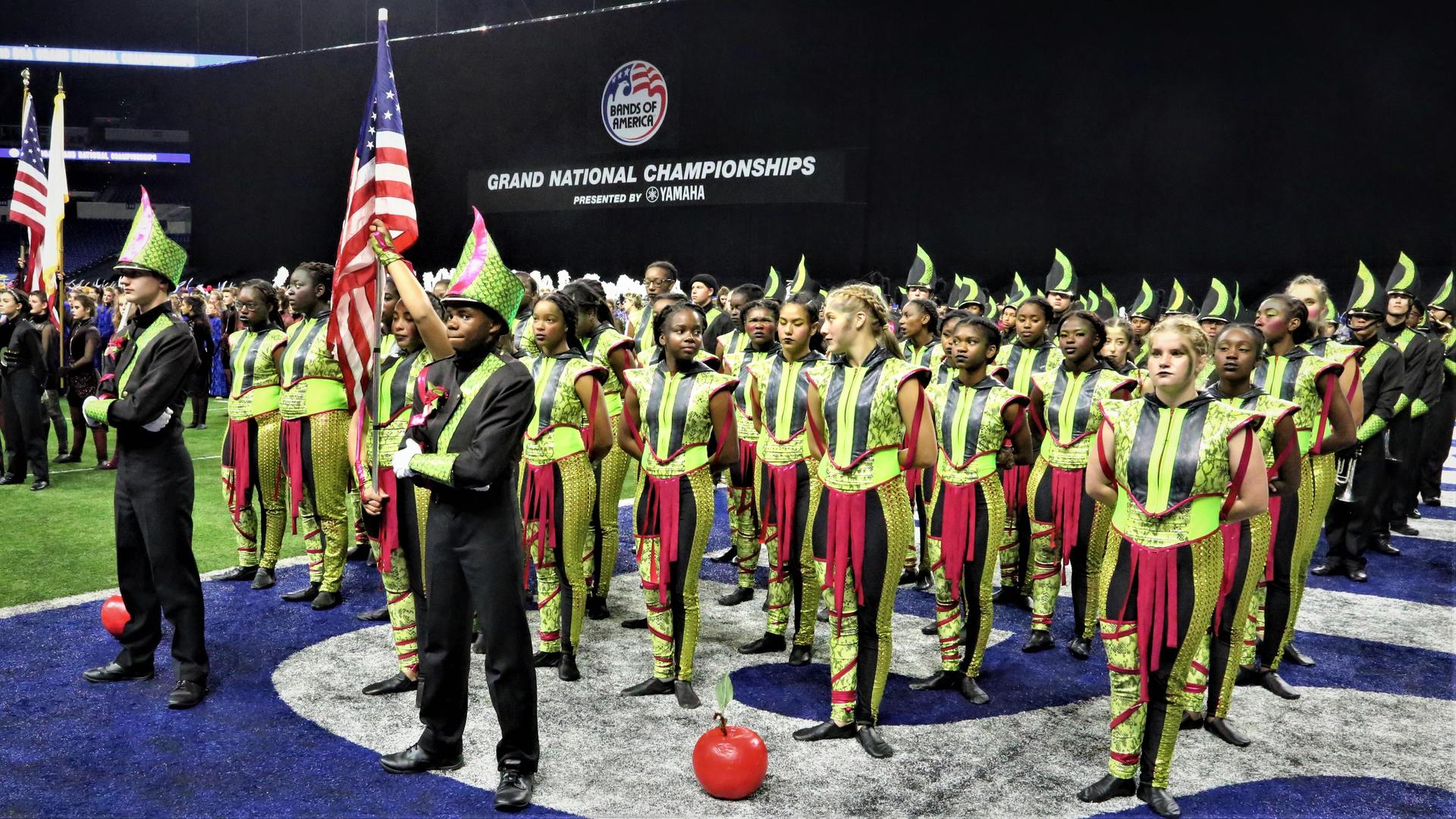 The Marian Catholic Band program has a reputation as one of the outstanding concert and marching bands in the United States. Over the past 40 years the bands have earned hundreds of awards and honors.
In the State of Illinois Marching Band Championships, Marian is undefeated in its class since 1980. This 40-year undefeated streak at state is unprecedented in any arena. The Spartans have also won 20 overall state titles. In Bands of America Competition, the Marian bands have been named Summer National Champion five times: 1984, 1985, 1986, 1987, and 1988; Class AA National Champion 21 times, and Grand National Champion seven times: 1985, 1987, 1988, 1989, 1994, 1997, and 2000.
The concert bands at Marian have consistently earned Superior ratings in Illinois High School Association Organizational Contests. The Symphonic Band is undefeated in its class at the Illinois Superstate Concert Band Contest. The Marian Concert Band also placed first in its class at the State of Illinois Concert Band contest every year attended. The Marian Symphonic Band participated in the first Bands of America National Concert Band Festival and participated again in 1995 and 1998. The Marian Symphonic Band has also performed at the National Band Association Convention.
The Marian Band is a holder of three Illinois and four Chicago Heights honorary proclamations, including a joint Illinois House and Senate proclamation in 1990. The band is also twice entered in the United States Congressional record in congratulatory commendatory messages. The Band has performed in 2 Macy’s Thanksgiving Day Parades: 2006 and 2013, the Pasadena Tournament of Roses Parade in 2010, and the 2000 Presidential Inauguration Parade.
Chicago Tribune video: Marching to Glory: Marian Band.

I know of no other program that cares more for students and also provides a truly superior experience in all that they do.

The Marian Catholic High School's concert and marching bands have become known from coast to coast as leaders among high school band programs. The Marian band's educational and competitive philosophies have been used as models for band programs in nearly every state of the union.
Recent awards and achievements for the 2019 – 2020 school year:
Past awards and achievements include:

The Concert Band is the intermediate performance level band which is open to sophomores, juniors, and seniors. Students in the Concert Band audition for chair placement at the beginning of each quarter. The Concert Band performs in three major concerts per year, one concert competition, and members are also part of the Marching, Pep, and Jazz Bands. 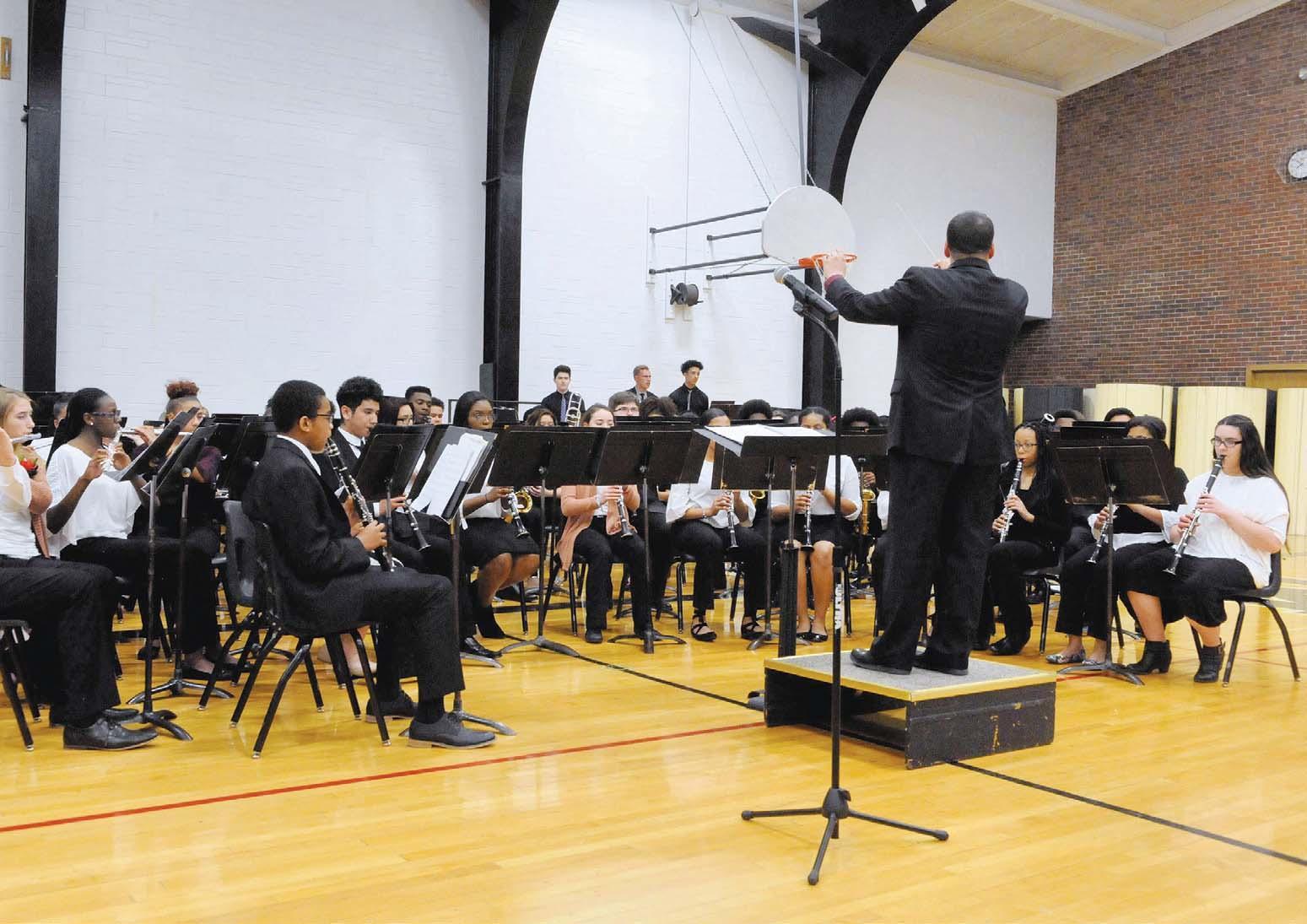 I have had the opportunity to see the Marian Catholic Band perform on numerous occasions and they are, without a doubt, one of the most incredible bands I have seen in my career as a music educator.

The Cadet Band is for all freshmen (with previous band experience or beginners) entering the Marian Band program. The Cadet Band members perform at two home concerts and one off-campus competition during the Spring semester. Emphasis is placed on the basics of musicianship and performance. From July – November, members perform with the marching band, and for the remainder of the year may also perform in the Symphonic or Concert Band if they choose to audition, Jazz Band, and solo contest.
NOTE: Students with no previous experience are also allowed to sign up for Cadet Band and will be taught as beginners. 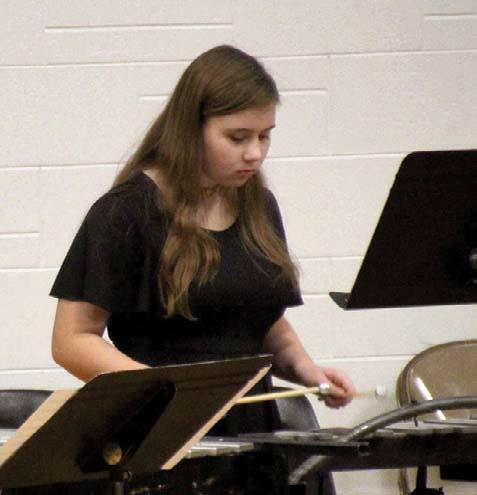 If your life path includes selecting experiences that develop excellence, then look no further. You have it in the Marian Band!

As a father, I hope that my children will have an opportunity to participate in a music education program that is remotely of the quality of Marian Catholic High School.

Jazz Band is the advanced Jazz ensemble at Marian. Students work on advanced jazz performance concepts and improvisation skills. Members of the Jazz Band audition for entry and chair placement and instrumentation is limited to a traditional “big band” set-up. Trumpets, Trombones, Alto/Tenor/Bari Saxophones, Piano, Guitar, Bass, and Drums. The Jazz Band performs at two Jazz Concerts during the Spring Semester and travels off-campus to several local festivals and venues for performances. Auditions are open to freshmen, sophomores, juniors, and seniors.

During my 23-year tenure at Illinois, it was my pleasure and privilege to teach several dozen Marian Catholic Band exes. Year after year, I marveled at their dedication and observed how it carried over into their academic and social well-being.

Marian Catholic has a strong percussion program offering students a wide variety of playing experiences. In the Fall, percussionists play on the drum line for home football games as well as in competition. In the Spring, percussions have the opportunity to play several different instruments and learn some incredible percussion only literature.

Playing under Mr. Bimm’s inspired direction would prove to be a wonderful experience for any young person interested in exploring their musical potential and broadening their life experience horizons.

The Color Guard accompanies the Marching Band with precision routines and dance. Auditions are required for placement.

The Marian Winter Guard is the indoor version of the Fall Color Guard. This group explores, to a greater degree, the influence of dance and choreography. The group choreographs their own pieces and performs at least one movement. The Winter Guard is open to freshman, sophomores, juniors, and seniors. The Winter Guard meets during the second semester and outside of regular school hours, two evenings per week.

Awards and achievements include:

Greg Bimm has been Director of Bands at Marian Catholic High School since 1977. Under his direction, the Marian Catholic Band has grown from 70 members to over 280 and is recognized as one of the premier high school band programs in the United States. The Marian Catholic marching band has been named Bands of America Grand National Champion 7 times, more times than any other band. The symphonic band was one of only eight bands invited to perform at the first National Concert Band Festival in 1992.
Mr. Bimm has received numerous National Band Association Citations of Excellence, was named the 1983 national winner of the ASBDA Stanbury award for young band directors and received the Sudler Order of Merit from the John Philip Sousa Foundation in 1991 and 1997. In 1995, Mr. Bimm was the first high school band director in twenty-five years to be invited to conduct the Illinois All-state band. In 1999, he was among the first to be awarded the “Mary Hoffman” Award of Excellence by the Illinois Music Educators Association, and in 2000 was recognized for contribution and support to arts education by the Illinois Alliance for Arts Education. In 2005, Bimm was elected to the Music for All/Bands of America Hall of Fame and in 2006, was named a Lowell Mason Fellow by the National Association for Music Education. In 2010, Mr. Bimm was given the Distinguished Service Award by the Archdiocese of Chicago and was inducted into the inaugural class of the Illinois State University College of Fine Arts Hall of Fame. In 2012, Bimm was awarded an Honorary Doctorate in Music Education by the Vandercook College of Music. Mr. Bimm was elected to membership in the prestigious American Bandmasters Association in 1994. Mr. Bimm holds degrees from Illinois State and Western Illinois Universities and an honorary doctorate from Vandercook College.
His professional affiliations include ABA, ASBDA, ILMEA, NAfME, NCBA, NBA, Phi Beta Mu, and Phi Mu Alpha. He has served on the Illinois High School Association Music Advisory Committee, and has served as Band Division chairman, District I and state equipment manager for IMEA.

In addition to his role of director of bands, Mr. Bimm has performed as conductor, clinician, adjudicator, drill writer, and music arranger throughout the United States and Canada.

He has completed over 40 years of teaching at Marian Catholic High School.